In tour guides, Sarajevo is often called the “Jerusalem of Europe.” As the guidebooks like to tell you, Sarajevo is one of the only cities in Europe where you can find a mosque, a Catholic cathedral, an Orthodox church, and a synagogue within 500 meters of each other. World War II and the Yugoslav wars have taken a toll on Sarajevo’s diversity, but at least for me this week, this spirit of tolerance was very much still alive.

In the past week and a half, I have celebrated the birth of Jesus (Christmas) at a Catholic cathedral and the birth of Muhammed (Mevlud) at my faculty. I have gone with my Muslim students and friends (the terms are becoming interchangeable) to a mosque, a cathedral, and a synagogue. Even though my understanding of Bosnian is limited, I have recognized many of the words in the sermons and lectures at these places: words like “light,” “goodness,” “welcome,” “peace.” I am missing the finer details, but from the very limited amount that I can understand, I can really see the parallels between the different Abrahamic religions. Religion is often used as an excuse for all sorts of conflict in the world, and differences in theology can lead to some seemingly incomprehensible differences in culture and lifestyle, but fundamentally, all religions seek to provide the same things: guidance, support, hope, a reason to live for. All religion–from Christianity to Pastafarianism–gives life meaning.

Here’s a summary of the different houses of faith and religious services I went to this week:

Midnight Mass at the Cathedral:

On Christmas Eve, I first worshipped at the temple of Shakespeare by watching Macbeth at an art cinema with my best friend. Then, I met a few more friends at the Catholic Cathedral for Christmas drinks and the midnight mass. In Sarajevo, there is a tradition that everybody goes to the midnight mass, no matter what their religion. Now that the different groups here have become even more distant, this idea of everyone coming together on Christmas has become even more important. It’s a beautiful idea in theory. In practice, it means that the mass is a total zoo–there were TV cameras and lights everyone, people leaving early, coming in late, texting, making phone calls, and pushing (Sarajevo people pushing is a topic for another blog post, or maybe a novel.) In short, it was exactly like Christmas mass in the US, minus the screaming children. I have attended mass in Bosnia and Croatia previously, and I always found it somewhat easy to follow, but I struggled to figure out the corresponding English prayers this time around. It was hot in there, I was tired, and the smog was making it difficult to breathe. I’m glad I got to see the church decorated for Christmas, but I ended up leaving after Communion. If I’m in Sarajevo again for Christmas next year, I’m not sure if I will go to the midnight mass.

Mevlud at my Faculty:

On Tuesday night, my faculty held a special, student-led service in honor of Mevlud, the Prophet Muhammed’s birthday. I only found out about the event because the singers have been rehearsing loudly for the past several weeks right outside the rooms that I teach in. While I wish they rehearsed somewhere else, I’m really glad that I went. From what I understand, mevlud services and traditions vary widely in different Islamic countries. In Bosnia, mevlud is kind of like a Christmas “Lessons and Carols” service–there are recitations from the Qu’ran and then performances by the choir. I couldn’t make out the meanings of the Qu’ran verses from my limited Bosnian (it was a good reading exercise for me to see the Arabic and then the Bosnian translation, since those are both languages I have studied yet totally failed to remotely master), but it was nice to see the students perform. The traditional Bosnian Islamic music that the students sang, accompanied by a drum, was equally moving. Most days, I see the beauty in Islam in the way that my students live their lives. On Tuesday, I saw the beauty of the traditions.

Synagogues and Mosques and Churches… Oh My!

In my English classes, we are talking about different religions in the US. I’m mining my own friends for sources about their religious practices. It’s a little bit hard to make a good comparison because most of my friends do not study theology, while my students obviously are, but we nevertheless had some really good discussions. After we talked about Catholicism, two of my students asked me to take them to visit the cathedral. They told me they always wanted to go inside but were afraid to go because they both cover themselves. I told them sure… as long as they took me to visit the Gazi Husrev-Bey mosque. Unfortunately, the cathedral was closed when we tried to visit, but they took me to the mosque anyway. I was there during evening prayers, so I was able to really relax, reflect, and observe the motions–it was really peaceful and beautiful. I especially love just hearing the muezzin recite in Arabic–it reminds me of going to synagogue for my friends’ mitzvahs and weddings. Even though it takes away a bit of understanding, I sometimes wish that Catholic services were still in Latin–there is something beautiful and powerful about using an ancient language to connect traditions to the present. The best part of the visit, however, was spending time with my students. We talked a lot about our own lives– where we were from, what our friends are like, how it is to be living away from home at 18 or 19. At the end of the visit, they reminded me that I have two more friends here in Sarajevo. Most of the time, it’s very awkward to have students who are basically my age, but at times like this, everything is worth it.

The trip to the synagogue and Jewish History Museum with the student group was also simultaneously beautiful and moving. I didn’t know any of the students going, but the president of the student group and a few of the upperclassmen who wanted to practice their English made sure that I felt welcome. Some even offered to translate the tour for me, but since I had already visited the Jewish Museum (and already know a lot about Judaism), I was able to follow the Bosnian. Sarajevo’s history is fascinating on all fronts, but the history of the Jewish and Islamic communities here are especially amazing (see this New Yorker article for an in-depth look at this history). I am excited to go back to the museum, with hopefully some of my first years and David in tow.

In conclusion, I had a very beautiful week in Sarajevo, filled with faith and tolerance and a desire to learn more about other religions. Overall, this week, I just felt very welcomed and embraced by my friends and colleagues, especially in the Islamic community. I wish that Donald Trump or anyone who believes in his Fascist misconceptions of Islam could spend a week in my shoes. If the average American could have experienced what I saw this week, I think there would a lot less hate in the world.

At Christmas Eve mass with my friend Eldin.

The Cathedral decorated for Christmas. Note the absolute HORDES of people.

Christmas tree outside the Cathedral. The municipality did a crap job of decorating, so Sarajevans took it upon themselves to add more.

Christmas lunch with the Nicenkos, who have become one of my many Sarajevo families 🙂 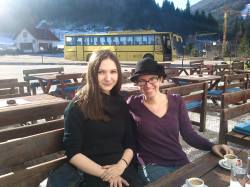 Ana and I at lunch on the mountains.

We found a little Christmas tree!

The beautiful “Christmas tree” that Esma and Eldin made for me.

At the mosque with my students.

The choir at mevlud.

Qu’ran recitation. I am so proud to teach all of these kids.

Synagogue visit with the student association. You will be able to easily find me in all pictures because I am always the only one smiling.